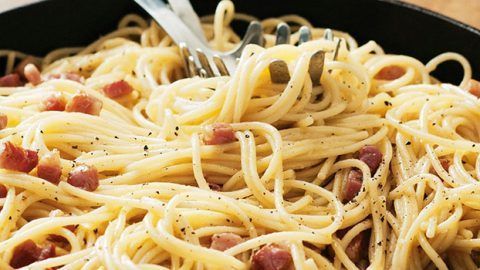 The spaghetti carbonara recipe is a traditional Italian pasta. Possibly one of the most popular…

Today we present this tasty recipe that we have called Chicken Carbonara, a less heavy…

Each traditional recipe has a thousand variations, and so does the recipe for authentic carbonara. For example, we have the baked carbonara, where a final gratin in the oven is added to the original recipe. Although it is true that most of the different versions are characterized by the addition or substitution of some of the ingredients.

Let’s start with the spaghetti carbonara with cream, where the egg is accompanied or replaced by liquid cream. This is a refined, creamier version with a less pronounced touch of egg.

There are also different trends in cheese: for example, some people do not like the strong taste of sheep’s cheese, and use half or even all Parmesan cheese. For example, this recipe for Pennes with Chicken Carbonara uses Parmesan cheese.

There are also different opinions about the type of pasta used for carbonara. In addition to spaghetti and continuing with the long pasta, Linguine Carbonara Recipe, foratini or fettuccine is very widespread, and they lend themselves very well to be seasoned with this rich and tasty cream.

Excellent short pastas are also used. In Rome it is common to serve rigatoni, and of course the delicious macaroni a la carbonara, which also has many supporters.

And changing the register, the carbonara pasta to the navy is super appetizing. It can be prepared, in turn, in numerous versions. The carbonara marina with mussels and clams, and the spaghetti carbonara with prawns are just two examples.

Finally, the vegetable carbonara pasta and the vegetarian carbonara, which makes most people wrinkle their nose, are very appreciated by those who have chosen to follow this type of diet.

It is very common to make several mistakes when making this traditional Italian dish.

The first and foremost mistake in making authentic spaghetti carbonara is the belief that it contains cream, milk or mushrooms.

It is also very common to believe that they are made with bacon, when in fact guanciale is used. This is the jowl of the pig, and in Italy they use it cured so that when it is fried it is crispy on the outside and very juicy on the inside.

Also when preparing pasta, it is very common not to respect the indicated cooking times. Just follow the instructions on the pasta package to get a delicious al dente pasta.

There are also many people who insist on adding olive oil or laurel to the cooking water. The pasta is cooked in water with salt, nothing else.

How to keep the egg creamy?

The secret is very simple, and has nothing to do with adding cream, which many combine for that purpose.

Fry the guanciale in a pan without adding more fat or, at most, only a teaspoon of oil, and season the pasta with the egg and cheese cream directly in the same pan where the guanciale has been previously cooked.

Once combined, just stir vigorously for one minute: you will see that the eggs tend to become creamy, but without generating the classic “lumps”.

How many eggs do I put in the spaghetti carbonara?

This is not a simple question. Some people use one egg for each person and others use one yolk each, plus one whole egg for every four people to ensure the right degree of creaminess.

If you want to make a sock and get a very creamy dish but not too heavy, you can choose two eggs and one egg yolk for every four people. The fact is that everyone can follow their own tastes by adding or decreasing the recommended dose at will.

And how many eggs do we put in for two people?

One egg and one yolk is the right point. And again, whole eggs or yolks? The secret of a perfect carbonara, creamy to the point, lies in the use of both.

A note. Not everyone likes to eat semi-raw eggs. There is nothing to stop you from changing the consistency of the cream, leaving it a little more in the pan so that it is well cooked.

Carbonara: with or without onions?

The original recipe does not want to use onions or garlic at all. Only black pepper is allowed, ideally crushed on the spot, to better appreciate the slightly spicy touch given to the dish.

What wine do we put to accompany the spaghetti carbonara?

The vaguely sweet taste of the carbonara pasta may make you wonder which wine is suitable to accompany the carbonara.

Choose a wine that is not as acidic as a Chardonnay or a Trento DOC.

How to reuse pasta carbonara

It happens to many of us that we prepare more carbonara paste than necessary. How can we use it so we don’t have to throw it away? Very simply, by recycling it into many delicious and creative recipes.

The first, and perhaps the most common, is to make a delicious carbonara pasta tortilla. Add a few eggs, 2 or 3, mix well the remaining spaghetti and egg and cook them in a pan with plenty of hot oil, on both sides and until they are completely browned. To make it even richer, if it is not rich enough, you can add a few cubes of cheese.

The carbonara spaghetti omelette can be baked in the oven, for an exceptional result suitable for serving something unusual for dinner. The baked carbonara you will get will test the most reluctant palates.

How about a pasta cake?

Line a baking sheet with dough, pierce the bottom and edges with a fork and fill with the dough. Pour a couple of beaten eggs with a little milk over it and spread it well. Bake in the oven at 180 °C for about 30 minutes and the dish is ready. The next day, as is often the case, it will be even better.

This dish, as famous as it is appreciated abroad, probably owes its name to the addition of ground black pepper which, when combined, gives the pasta a black colour that looks like shredded coal.

Spaghetti carbonara is a Roman recipe, certainly recent because it has only been known since the Second World War, but its origin is quite controversial, and there are at least three plausible theories.

Pasta dishes seasoned with products from sheep farming and agriculture, such as eggs and bacon, were common in the Abruzzo mountains, and displaced people discovered them and brought them to Rome at the end of the war.

A second hypothesis is that the Roman hosts, to feed the American soldiers, inspired by the idea that they ate eggs and bacon for breakfast, offered them pasta seasoned with these ingredients and, given the success, the recipe has spread.

The third hypothesis is that spaghetti carbonara has always been prepared in Roman inns. But only after the war did the recipe become known to the general public because it was included in printed cookbooks.

To provide the best experiences, we and our partners use technologies like cookies to store and/or access device information. Consenting to these technologies will allow us and our partners to process personal data such as browsing behaviour or unique IDs on this site. Not consenting or withdrawing consent, may adversely affect certain features and functions.

Click below to consent to the above or make granular choices. Your choices will be applied to this site only. You can change your settings at any time, including withdrawing your consent, by using the toggles on the Cookie Policy, or by clicking on the manage consent button at the bottom of the screen.